Two Eagles has been recognized as the "Best Outdoor Reception Venue" by the Vancouver Island Wedding Industry Association. 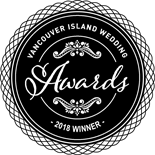 
Two Eagles Lodge has been recognized as the Comox Valley's "Best B&B" based on votes in the 2017 Readers' Choice Awards sponsored by the Comox Valley Record. The B&B was honored with this same award in 2016, and was the finalist in 2015. 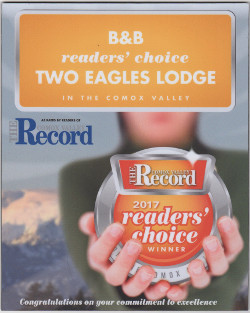 
Two Eagles Lodge, a waterfront b'nb/vacation rental in Union Bay, has received certification by the Canadian Wildlife Federation through its Backyard Habitat Certification Program. Certification is valid for five years.


MEGA HUGE BOUQUETS to Carolyn and Steve Touhey of Two Eagles Lodge B&B's for their Chamber Mixer on June 17th. What a wonderful evening of networking and excellent food (all done by Carolyn). The finale of wonderful music (by a number of artists in the area) and continued networking and fun continued well into the evening.


Article in the Comox Valley Record on the outstanding number of awards Two Eagles Lodge has won in 2011.


When Carolyn Touhey was invited to present marketing workshops at an international trade convention in Vancouver, she and her husband, Steve, added a few extra days to explore the Pacific Northwest. Little did they know how life-changing that trip would be.


The Island business community is getting familiar with Carolyn West-Price Touhey's name. And for good reason: she's a tireless entrepreneur


Carolyn and Steve Touhey, owners of Two Eagles Lodge, a B&B and vacation rental in Union Bay, were honoured at the 2011 Vancouver Island Better Business Bureau Torch Awards gala as winners of the 2011 Torch Award for the Hospitality/Tourism/Events industry