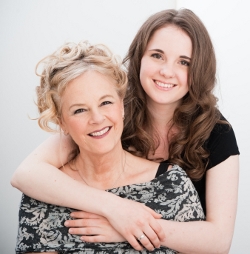 Union Bay, BC—Juno award-winner and BC Entertainment Hall of Fame Inductee, Shari Ulrich, has been a fixture in Canadian music since the early 70s.

Ulrich was first heard in the quirky and eternally orange group, Pied Pumkin, with whom she played fiddle, mandolin, dulcimer, flute, and sax.

Her defection to the Hometown Band and a high profile launch to national recognition sparked her solo career as a singer songwriter. Her recent release, “Find Our Way,” is her 7th solo album, and her 19th including her work with Pied Pumkin, UHF, and her recent collaboration with Barney Bentall & Tom Taylor.

Seats for the evening performance are $22 and very limited, so please call Carolyn at 250-335-2342 to reserve your seat or email HaveFun@TwoEaglesLodge.com.

Two Eagles Lodge, an award-winning B&B which opened in 2007, is located at 6409 Island Highway South, just north of the Buckley Bay ferry terminal. The owners, Carolyn and Steve Touhey, are great fans of live music and are happy to host such an intimate event with such talented musicians.

Ms. Touhey says, “House concerts are an incredible evening for everyone—to have such world-class entertainment right at home, surrounded by other music lovers. We never thought about our home and bed-and-breakfast as a venue for events, but it has worked out great.”